This Sunday – 20th July – will see the start of The Adventurist’s 2014 Mongol Rally: an adventure which entails driving old 1000 cc cars over 10,000 miles from London to Ulaanbaatar, Mongolia. 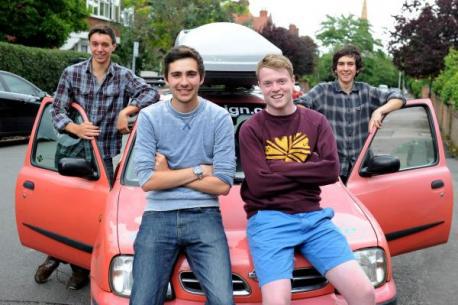 Drive is supporting ‘Yak To The Future’, a team made up four friends from London, Guy Khosla,
Jonti Davies, Matt Ingram and Ed Compson nephew of Drive’s TJ, who are taking part driving a sweet sixteen year old, salmon pink or should that be sunbleached red, Nissan Micra.

Of the 250 teams that set off on this mad-cap expedition and passing many mountain ranges, deserts, corrupt border guards, bandits and yaks, many will never make it.
Now in order for our team to raise the money for their chosen charities EducAid Sierra Leone and Cool Earth, they have to finish.

What could possibly go wrong??  Well in their words “we know diddly-squat about fixing cars, our sense of direction is average at best and we’re not sure if we can afford to buy food after Uzbekistan”.

So how can you help??  Please look at their intended route and see if they pass anywhere near somewhere or someone you know, let us know so should / when they are in difficulty they might have support nearby?