In the world of the design consultancy we are familiar with getting a wide variety of clients through our doors, along with a vast amount of projects from supercars to space craft … however … every so often there is always something you were least expecting.

So when a Top Gear producer entered Drive’s design studio; a world where dreams are created, made, smashed and cherished, he approached with a big grin on his face, beaming with his latest project for us to get involved with … and now it is a gaming sensation in Forza Horizon 4.

A brief was set out, to turn a common tractor into a ‘supercar-tractor’, to alleviate the common countryside issues of being stuck behind a tractor at speeds of 15mph for miles and miles … So this creation was to have a handsome V8 – it sounded like a good start. Other aspects for the new extreme farming solution was that it would have to be able to retain all the functionality of a current tractor; ploughing, towing, ground clearance etc.

So it couldn’t be compromised by its new super-car styling.

So with the desires of Matt Le Blanc outlined, the initial visual cues for the Track-tor were down-force, extreme styling, aggression and a McLaren F1 inspired seating arrangement. Large splitters and diffusers were a go head!

The designs were swept off to the Top Gear fabrication team, and our usual design process, common throughout the car design industry, of sketch, alias Cad, CNC mills, reviews, dynoc / highlight checks, was ……. side stepped.  Let’s just say the result was a true one off, bespoke hand crafted in the true tradition of British engineering  ingenuity and excellence.

A fun project to have completed and it was great to be able to get down to the Top Gear studio to watch the show filmed live as a bonus.  The Track-tor appeared on Country File and Top Gear and excelled in every test thrown at it, on track, road and field!    (25th March 2017) 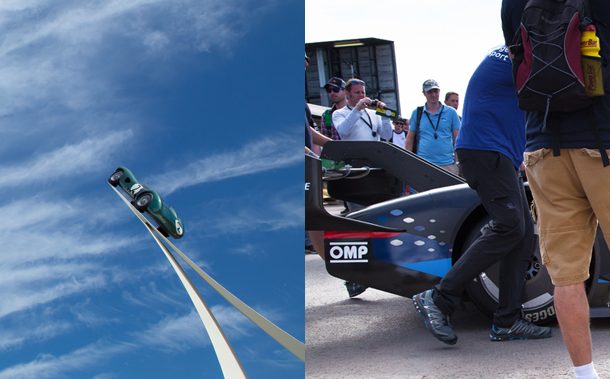 The annual Goodwood Festival of speed never disappoints. Every year I think it has the potential to become the victim of its own success as it borders on being too crowded, but there is no denying it is still one of the automotive and motorsport highlights of the year.

This year it was Aston Martin’s turn in the spotlight with an elegant 31m high sculpture towering above Goodwood House, which had a beautiful DBR1 balanced as its centrepiece. Celebrating 60 years since it first won at Le Mans, the marque had every era of their history represented with many taking part in the main event, the hillclimb.  The weekend was split by contrasting weather conditions: Saturday’s spectators hid from the blistering midday sun, with Sunday seeing incessant rain. VW brought along it’s ID-R electric race car, and made the best of Saturday’s grippy conditions and during the official timed session at the end of the day, it broke the hill climb record that had stood for over 20 years crossing the finish line in 39.90 seconds.  Given that it was a car tuned for specifically for the climb, it was then astounding to see the WRX cars climbing the hill only a handful of seconds slower.

The festival speed is usually dominated by modern day race and supercars and often the only place in the UK that you’ll be able to see new rarities in the metal. Indeed, given Goodwood’s prestige, some OEM’s use it to launch new cars. One of the most talked about new releases was the new De Thomaso that made its public debut at the event. Beautifully finished in a deep burgundy with Rose Gold trim finishes, it was on the whole very well received, as were the quartet of Zagato’s that were lined up alongside the Aston Martins. McLaren showed off their new 3 seater Speedtail hypercar alongside the 720S Spider, and being a family event, they made their stand even more appealing to the dads with their full size Lego model of their Senna.  Given that the new Lotus hypercar, the Evija, was released to the public only a week after Goodwood, it was surprising to a few that Goodwood wasn’t used to at least provide a sneak preview of the car, but it could be argued that in such a crowded space some of the impact would have been lost.

As impressive as it is walking around the Supercar Paddock getting close to cars retailing at 6 figures or more, the event always attracts the old favourites. The supercars you remembered from your childhood, the rallying icons, or the famous race liveries. A Sainz era Toyota Celica parked next to a Martini liveried Delta Integrale. A GT40 in classic Gulf colours parked next to another Martini Porsche. And then a collection of classic Stirling Moss era Mercedes Mille Milia cars. We all love modern day exotica, but we all still love the romance that comes with such historical cars, and this year it was impossible not to well up slightly at the sight of thirteen F1 cars that were all driven by Michael Schumacher throughout his racing career. Celebrating 25 years since Schumacher won his first world championship, the cars lined up next to each other which as well as serving as a wonderful tribute to the great F1 driver, for the F1 fans it clearly showed the progression of the design changes over the past three decades.

As always, Goodwood put on an event that showed why it is still the centre piece of the British motoring calendar. Next up, the Revival! 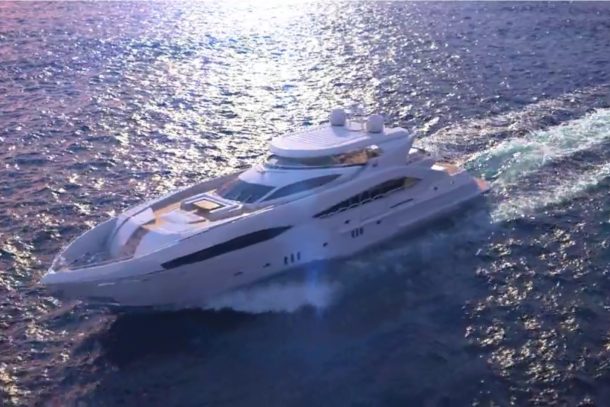 As July approaches our creative team are beginning to get the usual requests to produce animations and visuals for the Monaco Yacht Show in September 2019.

Drive have always shared the expertise and methodologies gained in automotive design with other product and transportation studios.  Our aim is to provide a quality service, building our reputation of bringing real value to our clients.  All knowledge gained from other industries is then incorporated into our work flows and brings benefit to all our clients across all sectors.

Working with yacht manufacturers’ marketing teams as well as supporting brokers, naval architects and yacht design consultancies, is an enjoyable experience allowing our creative team to work on projects without 4 wheels.

The article records his conversation with Drive directors Chris Longmore and Mark Pritchard and looks at some recent milestone projects in the company’s 20 year history and thoughts on both the challenges and opportunities that electrified power trains and autonomous systems are presenting automotive designers and companies. 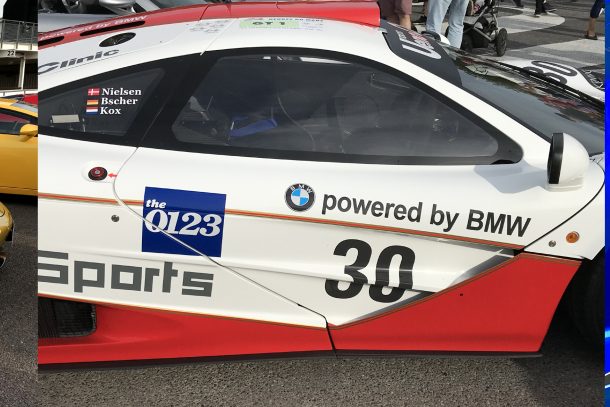 ﻿Driving down to Goodwood on Sunday morning, following a Lamborghini and keeping a watch on the Ferrari behind, I was reminded of a comment by Peter Stevens, “there are a lot of super cars, but not many super drivers!”.

Feeling a little bit of a fraud in the Zenos E10R, I parked up in the paddock whilst the line up of exotic machines on the start finish straight extended beyond the chicane.

It was great to walk round and discuss the various cars with friends and colleagues, and listen in on the comments of the crowd about the differing designs and what is the definition of a supercar! As far as our discussions were concerned they seemed to concentrate on details that we are currently in negotiation with engineers about, under/over flush conditions, door release positions and legal light heights!

This event has changed over the years and is now huge with very organised parking, a simulator ride, numerous breakfast bars to satisfy the bacon butty brigade and various stalls selling their products.

One of the more interesting exhibitors being Greenpower Education Trust who are a UK based charity which gets young people enthusiastic about science and engineering by challenging them to design, build and race an electric car. Have a look at their website here.

So with a clear road up through Petworth on the way back allowing me to enjoy the great handling of the Zenos, I look forward to catching up with more of you at the next ‘designer’s breakfast club’!